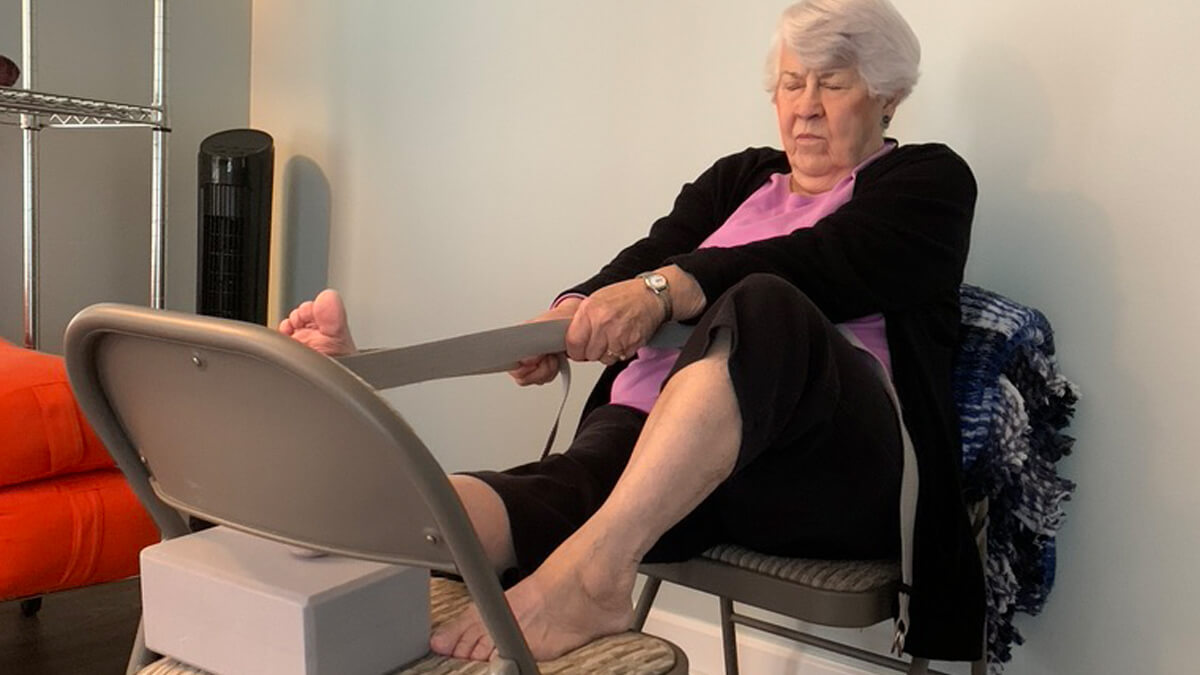 As we age, our bodies change and evolve. Despite our best intentions, we may become challenged by any number of physical restrictions, including arthritis, injury, disability, stress and the natural shift that occurs throughout the aging process. As we grow older, we must adapt to the challenges that our bodies impose on us.

For Judi Schrichte, the decision to remain active well into her 70s was a natural decision. The 78-year-old Simpsonville resident practices yoga several times a week. However, instead of physically getting down onto the floor of the studio, she completes most of the exercises from the comfort of a chair.

“I started doing yoga 16 years ago when I lived in Florida,” Schrichte recalled. “I (recently) realized that I needed to get back into something, because I wanted some flexibility and balance back. I don’t seem to have good balance anymore.”

Schrichte previously practiced yoga in the traditional manner, which involved getting onto the floor and into various poses. As the years progressed, yoga became more difficult for her due to issues with her hips, knees and feet, which in turn affected her overall strength and balance.

Encouraged by her daughter, Schrichte began taking classes at Centered Yoga & Wellness in Simpsonville. From the beginning, she was warmly welcomed by the studio’s owner and yoga instructor, Chandra White.

“She’s very good about creating a way I can do it,” Schrichte said. “Even though I can’t move as well as the other people in the class, I’ve noticed I can reach a little further. I can stretch a little more.”

White explained that she is accustomed to working with a wide range of clients, all with different physical restrictions. She has worked closely with Schrichte to modify the exercises to align with her comfort level and physical abilities.

“Getting up and down from the floor was an issue for Judi, so we are bringing the floor up to her,” White said.

During some portions of the class, Schrichte stands up while completing the exercises, typically placing one hand on the wall for an added sense of security. During some routines, she uses a bolster or block for additional support.

“Most of them are using walkers, rollators or wheelchairs during the class, and they complete the entire exercise routine while seated,” Glynn said.

During the class, participants who need it are encouraged to use the ballet barre, which has four sides and can be leaned on for support. Either a chair or their personal assistive device is placed behind them so they can sit down if they choose to, Glynn explained.

Glynn regularly incorporates the use of different props, such as a toning ball or yoga block, into her fitness routines. She encourages her clients to request a prop if they need one – they can help alleviate stress on the body and provide support during an exercise routine.

According to Glynn, the primary goal of her class is to offer a means of maintaining strength and mobility and to improve balance for seniors who are experiencing challenges as they age. She offers individualized private sessions for those who feel more comfortable meeting one-on-one or who are dealing with specific health challenges.

“I once had a client who had a hip injury and was just starting to get back into exercising,” Glynn explained. “She came in to do a private session so that we could go over modifications that would be applicable to her during group classes.”

While most seniors participate in a weekly class, others find that exercising more frequently is most effective in meeting their fitness goals. For Schrichte, having a regular routine helps keep her body limber. On the day that she attends classes, she feels she can move better.

“I try to go to class three times a week, and then I try to do some of the stretches and poses at home,” Schrichte said. “Eventually we are going to try to get me down onto the floor again.”